By now you might have heard about the latest Google algorithm update which continues to wreak havoc on SERP pages despite remaining unconfirmed and unnamed by Google. If you’ve noticed some unusual movements in your traffic then chances are Google has applied their latest algorithm to your website.

When the update started

Initial reports of SERP fluctuations put the start of the update on June 25th and all algorithm tracking tools indicate there are still substantial changes taking place. That means this update continues to roll out nearly two weeks later, making it the biggest update since the most recent Panda at the end of last year.

Despite the significance of the update Google still hasn’t officially confirmed or named it aside from this statement from John Mueller.

This might not be that surprising as so far, this year none of the suspected algorithm updates have been confirmed by Google, aside from one in March that was unofficially named ‘Fred’ and still went officially unconfirmed.

If you haven’t noticed any changes to your traffic or search rankings then keep an eye out, as big changes continue to hit SERPs. 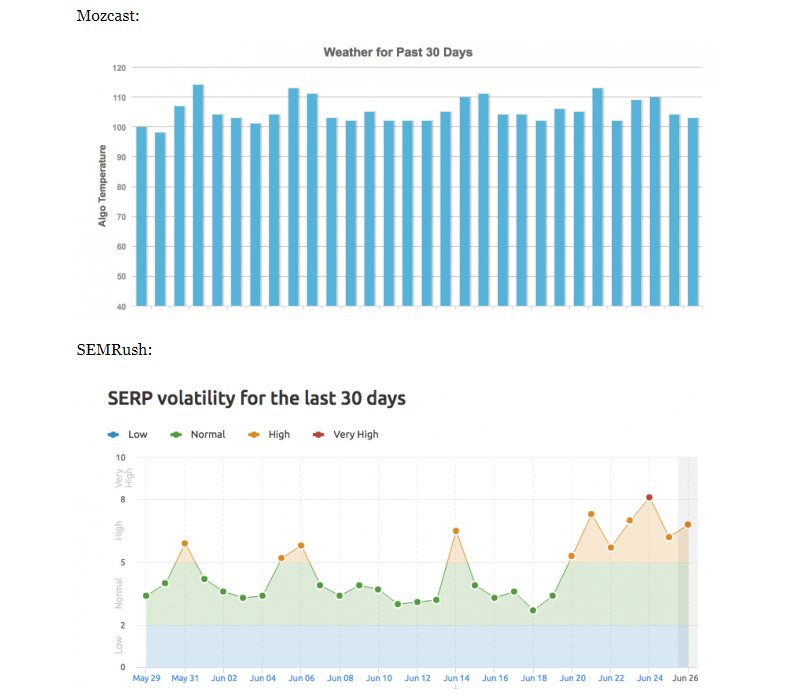 The algorithm update so far

Tracking tools like SEMRush and Mozcast have all shown widespread impact to SERPS, and a post by RankRanger indicates that across all industries the 6 – 10 positions are seeing the most fluctuations.

Google recently dropped the organic link for sites with a featured snippet in SERPS, and of course there was that unofficial Fred update in March. Both could have something to do with the current chaos, but neither seems enough to explain the dramatic and sustained fluctuations many have seen. So far webmasters and the corroborating evidence indicates this is a major core ranking update.

Conversely, other sites are seeing significant improvements; if your site is following white hat SEO techniques with quality customer focused content you shouldn’t see any negative impact. In fact, with other sites dropping down one or even two pages in the SERPS, sites using best practice SEO techniques could see improvements to their ranks. Fortunately, this seems to be true for many, as most reports show positive changes so far. One of our own clients has seen improvements seen the start of the roll out, as seen below.

What to do now

If you haven’t been impacted yet there’s a chance you may not see any changes, but with fluctuations persisting we recommend using a rank tracking tool such as Mozcast and monitoring your traffic closely over the next few days. Even if you do see any changes, as long as you’re sticking to SEO best practices and trust the quality of your content they should only be positive.

If you’ve seen any negative impact maybe it’s time to look at some of the updates over the past year and compare them to your site. While we can’t say for sure what this update is targeting, it’s probably safe to say that it will be building on the values Google has been working hard to install in the past year or so. That means mobile first thinking, quality content that is accessible to users without having to get through pop-ups or data collection gates, and clean SEO practices that reject sketchy backlink techniques. If an audit reveals you’re falling down on any of these, put it top of the list to fix this month.

A steady stream of algorithm updates can make the tricky world of search engine optimisation even harder to navigate. If you’re confused about the current update or unhappy with your organic traffic in general, contact one of our team today and find out how we can help optimise your SEO strategy.