In late 2017 Google released their beta version of a new Search Console to a limited number of users. Following comprehensive testing, Google has announced that it will be making the new Google Search Console available to everyone in the coming weeks.

For verified users in the Search Console, you will specifically be able to access the new Search Performance, Index Coverage, AMP status and Job Posting reports. Google has said that the new Search console reports provide "more transparency into Google’s indexing, stateful two-way communications between Google and website owners to help resolve issues faster, and a responsive user-interface."

More than just a facelift

Much like the Adwords and Analytics face-lifts at the beginning of the year, the Search Console is the next Google property to have undergone a drastic makeover. Rebuilt from the ground up, Google have surfaced the most actionable insights and created an interaction model which guides you through the process of fixing any pending issues.

If you're familiar with the old Search Console you may find the new UX a bit of a shock to the system. However, once you get to grips with it, you'll find that the new clean layout is easy to navigate and enables you to fix issues quicker.

As you click around you may find that you dip in and out of the new and old Search Console; until the new console is complete, both versions will live side-by-side and will remain interconnected.

One of the most significant changes is to Search Analytics. Where previously webmasters could only access up to 90 days of historical data, the new Search Performance report now includes 16 months of data to make analysing longer-term terns easier. From this report you'll be able to see clicks, impressions, CTR and average positions whilst also filtering by web, image or video search results. You'll also be able to segment by query, page, country or device type to further personalise this report. The new report also enables year on year comparisons with this data soon to be made available via the Search Console API. 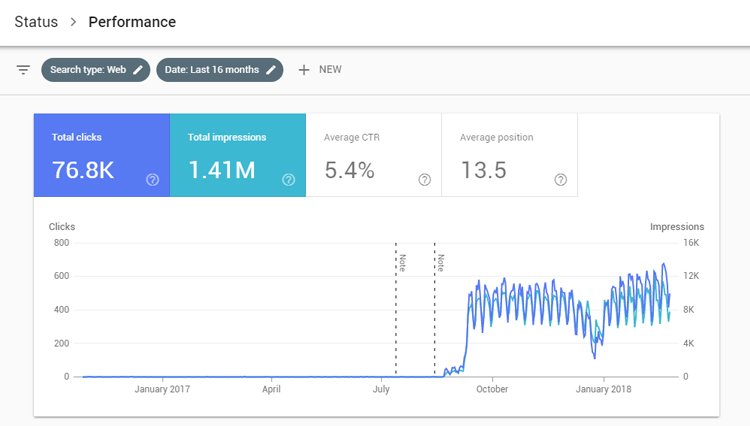 In the new console, Google has also introduced a number of new reports; namely the Index Coverage Report. Replacing the Index Status report, this updated report gives you insight into the indexing of URLs from your website including; correctly indexed URLS, warnings about potential issues and reasons why Google isn't indexing some URLs. The report has been built on Googles new Issue Tracking functionality and so you'll be informed of new issues more quickly. 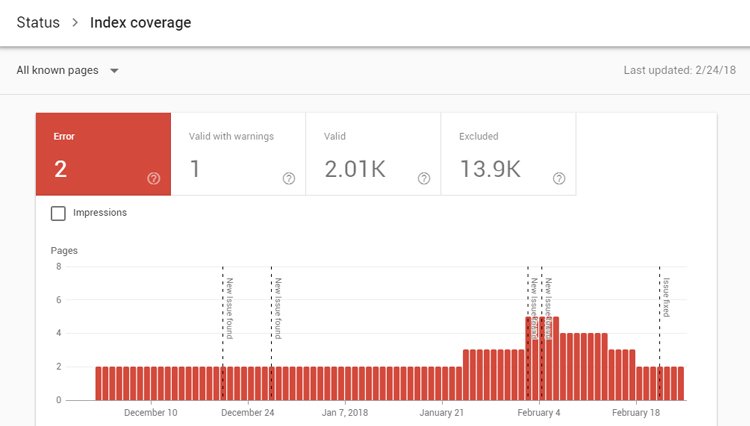 In Google's continued drive towards mobile, the AMP status report will give you errors and warnings about your AMP URLs. Google said that “you can request that Search Console validates the fix across multiple pages.” Once the issue is fixed, Google said it will “crawl and reprocess the affected URLs with a higher priority.” In addition, the AMP reports can be shared with external teams.

Google is looking for continued feedback from webmasters to help further improve the platform. If something is confusing or wrong, or if there is something you really like let them know in the forums.