In September, we covered the then upcoming interstitial algorithm by Google. This ‘interstitial ban’ was the latest push by Google for better mobile experiences and started rolling out on January 10th.

Now one month on, we’ve taken a look at how interstitial users have responded to the changes, and how they’ve been effected.

There are various types of interstitial and they can appear at any point whilst browsing a website. They can range in size from non-intrusive banner ads to full-screen adverts and can appear in the transition between pages or on content straight from the search results. They also have varying levels of user involvement; from simple brand awareness adverts to newsletter sign up forms and eBook downloads.

An interstitial can achieve much higher engagement rates than other forms of digital advertising and many have come to rely on them for downloads, email sign-ups and other data collection. However, while they are popular amongst advertisers, their intrusiveness is extremely disruptive to the user experience.

Interstitials can be annoying at the best of times but are especially irritating in the mobile experience. The smaller screen size can make even innocuous interstitials seem intrusive, and exit buttons that are already obscured on a desktop become impossible to find on mobile. They also go against the grain of the mobile experience; users tend to use mobile for speed and convenience, both of which are disrupted by the use of interstitials.

Unsurprisingly, Google decided it was time to take action.

The algorithm only applies to mobile websites and search results, and not all of them will be penalised. Banner ads that take up a ‘reasonable’ screen space, legal requirements such as cookie information and age verification, and private content that needs login dialogs are all still acceptable.

Any popup that blocks the main content at any point, standalone ads that fill the whole screen, ads that need to be dismissed before the content can be viewed and interstitials that take up the screen above the fold are all deemed intrusive and will be potentially penalised by the new algorithm.

The algorithm officially started rolling out on January 10th, but previous experience has shown not all algorithms have the dramatic effect Google intends. So, has the new algorithm had the desired effects, or are interstitials still going strong? 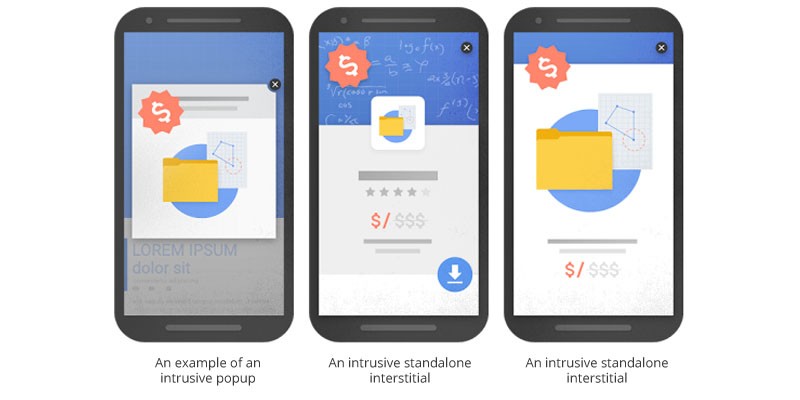 The results of the interstitial algorithm

Writing for Search Engine Land, Glenn Gabe has noted the response to and effects of the algorithm since last month. In general, interstitial users responded in one of three ways; removing any intrusive ads in the lead up to January, removing intrusive ads after the January 10th deadline or taking no action at all.

For those that were aware of the deadline, many weren’t willing to risk the hit to their mobile search rankings. Similarly, of those that only found out about the algorithm change after the deadline, many were quick to remove their ads before looking at any of the early effects. For these advertisers, the risk of negative impact on rankings and traffic outweighed the benefits of their popups.

Conversely, some advertisers chose to leave their interstitials up and risk search rankings to test the new algorithm first. While risky, these publishers could potentially keep their search rankings and the engagement from their popups should the algorithm fail to have the Google’s desired impact. 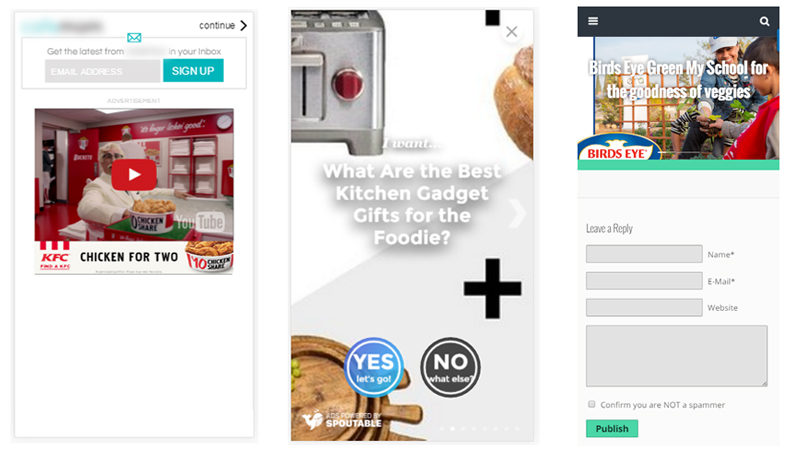 From the seventy URLs tracked since the roll out, some initial effects were noted in the first week. A handful of examples shows some URLs dropping as many as 14 positions in search results. The algorithm seemed like it could be working.

Despite this early movement, little to no change has been seen since. Many of the tracked URLs, including those that left their interstitials in place, are ranking the same today as they were before the roll out.

The example URLs that are still using interstitials show a range of popups, from auto-play videos to full-screen ads and data capture forms. Despite including some of Google’s worst offending interstitial types, their rankings have yet to be effected. Search rankings for both desktop and mobile remain the same, with no negative impact on the mobile search results compared to desktop as you would expect to see from the working algorithm.

While these advertisers can reap the rewards for the time being, there is nothing to say Google won’t improve the algorithm in the near future. If interstitials continue to be widely used Google may decide to strengthen the algorithm, leaving advertisers to suffer the consequences.

If Google does strengthen the algorithm, it’s still unlikely interstitial users will go down without a fight. Many will continue to test the algorithm as it progresses, using different interstitial types to determine what’s safe and uncover any loopholes.

For example, the algorithm only penalises interstitials from the mobile search page. This means that any interstitial adverts within the site and between site pages are still fine. For many advertisers, this loophole provides an opportunity to still use popups without impacting future rankings. It is also perhaps a blessing in disguise, as interstitials from search results can potentially increase bounce rates. By moving these adverts to a page transition point, advertisers can continue using interstitials and help to improve the user experience.

While few advertisers have felt any effects from the algorithm, anyone using interstitials should still be looking at alternatives. As well as being at risk from algorithm changes by Google, interstitials themselves continue to be detrimental the user experience.

While high engagement rates make these ads tempting, the negative impact of these ads is just as high and harder to track. Many users enter false information in data forms, while others may dismiss the interstitial to see the content once and later choose to avoid the website again. Advertisers should instead look at other ways to capture emails or encourage engagement without negatively impacting user experience.

If you want to know more about avoiding Google algorithm penalties and optimising your digital marketing strategy, contact one of our team today.